vadkan
SOUTH CHINA SEA — A U.S. Navy warship sailed through the South China Sea this week, prompting yet another angry response from China, which claims almost the entire region as its own.

Disputed islands in the South China Sea are claimed by at least six countries: the Philippines, Vietnam, Brunei, Malaysia, Taiwan, and China. According to a report compiled for the U.S. Congress, China has undertaken large-scale land reclamation in the area since 2013, creating seven artificial islands in two years.

Fiery Cross is a 700-acre man-made island with a 10,000-foot military runway, deepwater port, and other military facilities. Given its extensive infrastructure, it is presumed to be the future hub of Chinese military operations in the South China Sea.

The U.S. has said the operation was conducted to exercise freedom of navigation rights in the area, which are reportedly being restricted by excessive claims in the region.

Fiery Cross Reef is claimed by China, Taiwan, Vietnam and the Philippines. Except for the Philippines, the rest of the claimants all require prior notice for transit rights within the 12-mile zone, according to the New York Times.

The demonstration comes ahead of a United Nations ruling on whether Beijing has maritime rights around reefs and atolls in the South China Sea.

Welcome to TomoNews, where we animate the most entertaining news on the internets. Come here for an animated look at viral headlines, US news, celebrity gossip, salacious scandals, dumb criminals and much more! Subscribe now for daily news animations that will knock your socks off.

Get top stories delivered to your inbox everyday: http://bit.ly/tomo-newsletter 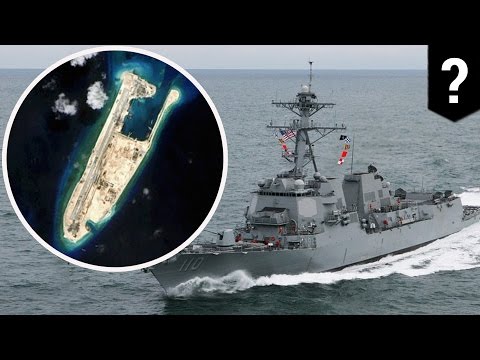 SOUTH CHINA SEA — A U.S. Navy warship sailed through the South China Sea this week, prompting yet another angry response from China, which claims almo...